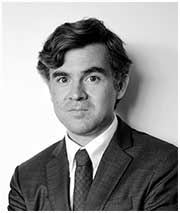 Conal Calvert was called to the bar in Ontario in 2020 after articling with a small firm in Toronto.